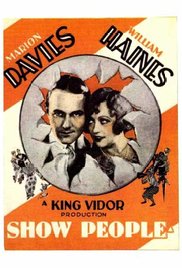 Starry-eyed country girl Peggy Pepper (Marion Davies) dreams of being a movie star. So that she can begin her career, she persuades her father (Dell Henderson) to take her to Hollywood. After a rough start, Pepper catches a break when she meets small-time studio liaison Billy Boone (William Haines), who lands her a job acting in a cheap slapstick comedy. Pepper quickly makes a name for herself and is signed for more high-profile projects, much to the dismay of Boone, who is falling for her.