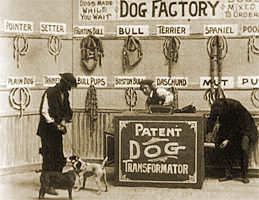 Two men are operating a ‘dog factory’, using a device that they call a Dog Transformator. A man brings three dogs into their shop, which they purchase from him. They place the dogs one by one into the machine, which turns each dog into a string of sausages. As their customers come in, they are then able to select the kind of dog that they want, and the machine changes the corresponding string of sausages back into a dog.

The execution of Topsy, a female elephant, in a publicity stunt advertising the opening of Luna Park on Coney Island. Topsy was originally owned by Forepaugh Circus where she killed a drunken spectator who burned the tip of her trunk with a cigar. She was sold to Sea Lion Park in 1902 which was then sold to new owners who turned it into Luna Park. After they decided they could no longer handle her, the owners of Luna Park announced they would hang Topsy, leading to an outcry by the ASPCA. The owners then decided they would electrocute the elephant, with a backup plan of feeding her cyanide-laced carrots and strangling her with a cable.

Summary
American short silent film. From Edison’s catalog : “On the walls of the factory a lot of different varieties of frankfurters are hung. Each is marked with the breed of dog it is made from. A combined dog and bologna making machine is seen in the foreground, and two Germans are working industriously over it. A tramp enters with about a dozen dogs of various types, and sells them to the Germans. They are soon transformed into sausage and the tramp departs with his cash. A dude now enters who wants to buy a spaniel. The dog is quickly made and sold. A number of customers follow and are supplied with dogs that suit their fancies. Finally a tough enters who wants a bull dog. A Boston Bull is produced, but does not suit him. He wants a fighting bull. The dog is made, and as he jumps from the machine he grabs the tough by the pants, and dog and man mix up in a rolling match all over the floor. The tough finally releases himself and disappears, leaving the fighting bull dog to be again turned into bologna