Summarie
A grief stricken widowed man, devotes his life to caring and providing for his very young daughter. He quickly secures a job at a nearby pigeon farm. One day he runs into an old sweetheart, but he soon realizes he cannot support a wife and his child too, so he sacrifices his own happiness for his daughter. Years later his daughter returns from school a young woman. She promises her father that she will never leave him. Then one day a young man turns her fancy, and they are both smitten with each other. As they meet secretly, her father finds out and angrily confronts the young man. His daughter explains she is in love and they are going to get married. Heartbroken, the father leaves, not wanting to see them again. A year later, the daughter has a baby of her own. With her husband always busy, she becomes very lonely. Missing her father, she visits him and places the baby in his arms. Upon seeing his daughter and grandchild he is immediately restored with joy and happiness.

Storyline
In the opening of this subject we find the callow youth as he points towards the city’s spires, exclaiming to his dear old mother, “Mother, there in the big city is my sphere. There will I turn the world over.” Off he goes cityward, ambitious and presumptuous, and perhaps we may add reckless. Alas, the city’s whirl is quite a change from the simple quiet life in the country and the youth falls a victim to the snares that beset the unsophisticated. After a bitter experience he returns, and in symbolism we show him in the raiment of sin, a convict’s suit. Approaching his old home, he sees there in front of the door the old chair in which sat his mother on the day of his depart. What a difference! On that day there shone the sunshine of hope; today, the clouds of despair. As he regards himself in his prison garb, he utters that penitential cry of the ancient prodigal, “I am no more worthy to be called thy son.” Turning away, he staggers exhausted to the pigsty, where he eats ravenously … Written by Moving Picture World synopsis 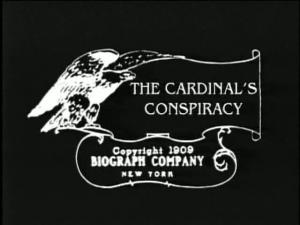 A royal woman rejects her arranged marriage. The cardinal hatches a plan: the suitor will shave and change clothes. He arranges with 4 clowns to stage an attack on the princess which he easily repels. It works; the princess falls for him, especially when the cardinal arranges his arrest.

“Around this house a terrible mystery, that one might say rules the world – the mystery of FEAR. Fear that is nothing, and yet every man trembles at this invisible thing from the cradle to the grave…”

~Plot Synopsis~From Silent Hollywood
Traveling through Africa on safari, a group of white hunters and their wives suffer under the
tropical hardships; one of their number dies in childbirth. The little baby girl is adopted by the
overbearing Mrs. Harrington and brought to the United States, where the treatment she receives in
the home of her “mother” is none too kindly. Years later, the unsuspecting Agnes is a guest at the
home of John Fairfax, where two schemes are being pursued: Mrs. Harrington is trying to ensnare
the wealthy J. Wilson Rockmaine into a marriage trap with the lovely but unwilling Agnes, and a
gang of bootleggers is trying to uncover a large sum of money hidden in the house. There are two
murders; everyone is suspected; and Agnes, Fairfax, Romeo (the colored servant), and the maid are
all locked in the house while detectives seek the slayers. At the height of a violent storm Agnes
discovers Rockmaine to be guilty, then is informed of her real father’s wealth. Agnes and John
marry.

On a warm and sunny summer’s day, a mother and father take their young daughter Dollie on a riverside outing. A gypsy basket peddler happens along, and is angered when the mother refuses to buy his wares. He attacks mother and daughter but is driven off by the father. Later the gypsy sneaks back and kidnaps the girl. A rescue party is organized but the gypsy conceals the child in a 30 gallon barrel which he precariously places on the tail of the wagon. He and his gypsy-wife make their getaway by fording the river with the wagon. The barrel, with Dollie still inside, breaks free, tumbling into into the river; it starts floating toward the peril of a nearby waterfall . . . 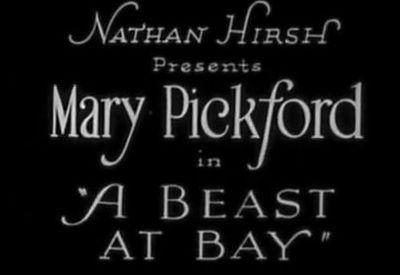 A young, and fickle girl ( Mary Pickford ) dumps her admiring boyfriend ( Edwin August ) because she views him as a coward. Meanwhile a ruthless convict ( Alfred Paget ) has escaped and takes the girl as his hostage. After a harrowing automobile and train chase, the ex-boyfriend rescues the girl and he immediately becomes her hero, which she seals with a kiss.