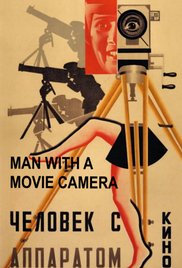 Part documentary and part cinematic art, this film follows a city in the 1920s Soviet Union throughout the day, from morning to night. Directed by Dziga Vertov, with a variety of complex and innovative camera shots, the film depicts scenes of ordinary daily life in Russia. Vertov celebrates the modernity of the city, with its vast buildings, dense population and bustling industries. While there are no titles or narration, Vertov still naturally conveys the marvels of the modern city.